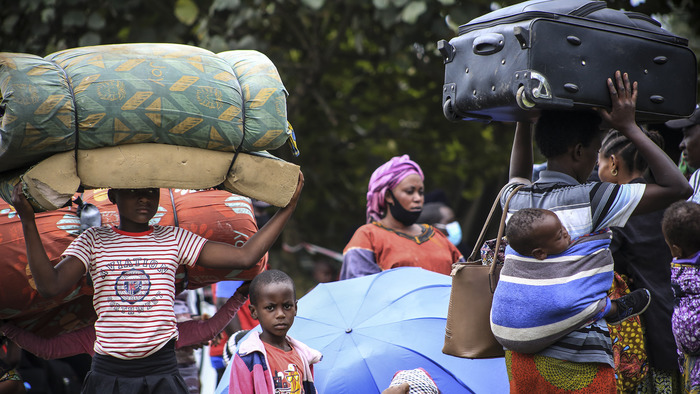 Following the volcanic eruption of Mount Nyiragongo on May 22, authorities in the Democratic Republic of Congo, have started a phase by phase resettlement of residents displaced by the crises.

The explosion had left hundreds of thousands of people displaced and without a proper means of livelihood.

Scientist have warned that the eruption may be far from over, as hundreds of thousands of evacuees remain scattered and families are still separated across the region amid warnings of further eruptions in the city centre and its adjacent lake.

The lake is believed to contain vast amounts of trapped carbon dioxide that could suffocate residents if released, hence the warning by volcanic experts.

Many displaced persons were however, seen heading back to the eastern city of Goma, which was evacuated during the height of the volcanic eruption, which left at least 32 people dead and 20,000 homeless.

Humanitarian agencies say many families who were separated while fleeing the city, are now returning home over lack of food and difficult living conditions, both at reception sites and in the homes of families hosting many of the displaced people.

“Today, we decided on the progressive return of displaced people in line with a plan which will be issued by the military governor,” Prime Minister Jean-Michel Sama Lunkonde said during a news conference in Goma on Monday.

“Compared with two weeks ago, the situation in terms of seismic activity has improved. We now able to contemplate the future with less worry,” he added.

He noted that, sites on the outskirts of Goma that were destroyed by the eruption could no longer be inhabited.

“We must learn from the 2002 and 2021 eruptions so that our populations are never again so close to danger,” he said.

The government had on Saturday reopened Goma’s airport, which is eastern DRC’s main hub for delivering aid to the strife-torn region.

Recall that in 2002, Mount Nyiragongo, one of the world’s most active volcanoes erupted, flowing volcanic lava through Goma. The incident alone, left more than 200 people dead.

Nyiragongo’s deadliest eruption, was in 1977, and it killed more than 600 people.