Welcome to the first edition of Building Hope, a newsletter from the American University of Nigeria (AUN). Frequently when we speak in the U.S. about what’s going on in our part of the world, people ask us: “How can we know some of what you know?” During the height of the Boko Haram crisis, few international media traveled to the northeast and those that did were in the area only long enough to see part of the picture. As a new threat—famine—now descends on our region, there is little awareness in the world outside.

There are many stories in this part of the world worth telling. Some are about the perils people face here, some about the possibilities. We will share both with you.

Each month we will bring you news about the overall humanitarian situation; the health and well being of children; poverty and illiteracy; the role of women; violence and efforts to prevent it; approaches to economic development and job creation; and AUN’s efforts to effect lasting change through innovative programs devoted to improving the lives of people in this part of the world.

In 2012, as Nigeria faced insecurity resulting from the removal of fuel subsidies, I along with AUN’s chairman of the board, Muslim, Christian, traditional, women’s, business and other community leaders gathered and formed the AUN-led Adamawa Peace Initiative (API). The goal was to focus primarily on vulnerable youth who have had no education or had left school, were orphaned and had no work and no prospects. These are precisely the youth who were joining terrorist groups, not only here but elsewhere in the world.

API fosters peace through education, empowerment, and community development. API brings together a council of leaders to promote harmony, build trust and respect, and identify and engage vulnerable youth through a variety of programs, including “Peace through Sports,” internet technology training, literacy, and entrepreneurship classes.

“The Peacemakers” television show, an annually celebrated Peace Day, a peace lecture series, and the Adamawa Grand Alliance. API members, who have a deep understanding of the needs of and connections to the local community, assist in the selection of the most vulnerable youth to participate in the various programs.

Of the nearly 30,000 young people involved in API programs, none has joined a terrorist or criminal group. During the height of the terrorist violence, AUN and API were feeding nearly 300,000 displaced persons, though the largest part of their work is equipping vulnerable populations with skills and hope.

The API model of development and peace-building has moved beyond its base in Yola, Adamawa state, and is present in other cities and adjoining states devastated by Boko Haram, and where famine threatens. There will be much to share in the coming months, for even as Boko Haram has been degraded, other calamities and challenges loom, will be with us for the foreseeable future, and will take an international effort to resolve. Waiting is not an option. There is much work to do, and it must be done now.

In this edition, we look at conflict resolution from two perspectives. The first piece looks at conflict resolution and the role of the press. As you’ll see, it’s not an oxymoron. Then we look at efforts to resolve conflicts over territory with an ethnic dimension. The press has a role to play, but success will rely heavily on grassroots engagement and some innovative techniques.

Please drop me a line with your thoughts and suggestions about our work.

To read the full newsletter, In this edition, you will find the following articles:

Peace Journalism: Another Dimension to a Free Press 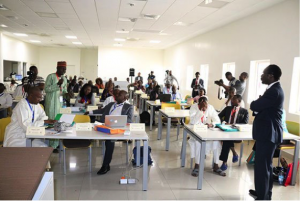 The process of conflict resolution and reconciliation in Nigeria will take many years and involve numerous segments of society. The societal fissures that cause conflict are myriad and complex. Recently, there has been an upsurge in violent incidents involving Fulani cattle herdsmen and farmers (See our next story below).

AUN believes that those in the business of reporting the news have a special obligation to report not only on the violent incidents themselves but also on the causes behind them. Further, there’s a need to follow such stories over the longer term, illuminating different perspectives, holding authorities accountable, and seeking solutions.

To help accomplish these goals, AUN created the Peace Journalists Network, which includes training, a website, social media pages, and a community forum for exchanging best practices (http://www.peacenetwork.org.ng). The U.S. Embassy in Abuja has committed startup funds to the program.

The professional field of peace journalism has been around for some time, generating theories, research journals, and curricula. According to the AUN Peace Network website:

“Journalists can play a critical role in conflict prevention. By monitoring and reporting the situation on the ground, they can provide early warning of simmering discontentment before they erupt into violent confrontations. Journalists can also work with communities and local players to streamline disagreements in a way that is constructive and leave room for reconciliation.

With their experience and expertise, journalists are well plugged into the community and channels of communication-including the local rumor mill. They can thus help counter rumors and prevent violent reactions from supporters.”

The first conference featuring more than 60 journalists from throughout Nigeria was held at the AUN campus in Yola in early June. Conference coordinator Professor Jacob Udu Jacob said that participants enthusiastically welcomed a role in the peace process.

He said that he expects reporting to become more multi-dimensional, more sensitive to victims, and more sophisticated in analyzing causes and solutions. “I’m encouraged by the number of participating journalists who have remained in contact with each other after the conference,” he said. “There’s a real hunger to learn and to share, and that’s always a good sign.”

In the past year, more than 1,000 civilians have been killed in Nigeria, not by terrorists but by members of farming and cattle-herding communities who kill each other. Farmer-herder violence has come to the attention of the U.S. and European governments, which have funded research and intervention programs.

One such project is funded by the U.S. Agency for International Development’s Office of Conflict Management and Mitigation. Bamidele Fagbite, the project manager for the non-profit Search for Common Ground, also known as Search, says that his program is having the desired result but warned that sustained work is needed to avoid significant bloodshed.

“The violence was once contained to certain areas of the county,” he reported, “but now it threatens a much larger area.” He said that international assistance to help resolve tensions is a sign that the conflict can further destabilize Nigeria, as it spreads across the region where people who are mostly from the Fulani ethnic group tend their cattle.

Fagbite, who spoke at the Search office in Washington, D.C. in June, said that while conflicts between the nomadic and semi-nomadic Fulani and residents of so-called settled communities that rely on farming is not new, the level of violence and destruction is. Frictions are many, including religious differences—the Fulani are mostly Muslim—and are often ignited when a wayward cow eats a farmer’s crops.

Insults follow, and sometimes the offending cow is killed. Tempers flare, leading increasingly to violence. Revenge-seeking disproportionately falls on women and children, who are less able to defend themselves. Some of the killings has been especially horrific.

A role for radio 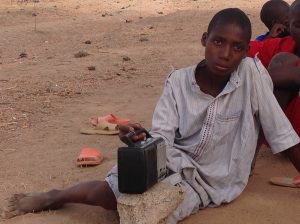 The search uses multiple tactics to learn about the causes of the violence and how to prevent it. Local radio programming is used to spark conversations and highlight overlooked or marginalized perspectives from those in conflict. Radio supplements community meetings where all parties, including local government representatives, discuss problems and possible solutions.

A survey indicated that 70 percent of the sample had listened to the radio programming, with one person stating: “It has made me understand that we need one another … I have been appreciating others … even if they’re not from my religion.”

Fagbite says his research pointed to the creation of larger community events featuring dancing, where parties in conflict act out the story leading up to the conflict. In addition to the entertainment value, dancers and the audience learn of feelings and perspectives that might not have been communicated in any other way.

Fagbite acknowledged that meetings have to be orchestrated carefully to avoid making things worse. “It’s a serious blunder to, for example, ask the representative of one religion to say the closing prayer at the end of the meeting. The people representing the religion left out will be deeply offended. Much better to let one Christian elder and one Muslim elder say a prayer.”

He said that one effective technique was to explore definitions of violence. Most of the people he works with defined violence as leading to the death of someone. “They didn’t realize that non-fatal forms of violence are very destructive and can lead to the kind they were most familiar with.”

A role for government

Fagbite argued that the media, especially radio, mostly reports on sensational aspects of the story, thereby fanning the flames. But since his approach in part focuses on identifying the common interests of parties in conflict, the media, he believes, also have an obligation to join him and his colleagues in this exploration.

And since government actors at all levels should be hungry for such insights, the media have an opportunity to influence policy, increase transparency, and boost accountability.

Fagbite said that the Search program had improved government responsiveness and early warning about impending conflict by having conversations about the roles and responsibilities of all the different parties. Before the intervention, parties to the conflict would not contact government officials, including the police, until it was too late—if they contacted them at all.

Search’s approach also includes workshops with representatives of parties in conflict to identify mutual interests; a cross-cultural festival where cultural differences are shared and celebrated; mobile cinema screenings where specially trained representatives act out conflicts and demonstrate peaceful ways to resolve them; and the training of trainers to continue working after Search has departed the scene.

The next big challenge for Fagbite and his colleagues is bringing women into the conversation. Currently, men do all the talking — and the fighting. But women and children are doing a disproportionate amount of the dying, and that needs to stop.