AUN President Margee Ensign told former Peace Corps Volunteers that their work lives on in Africa and elsewhere in the world. 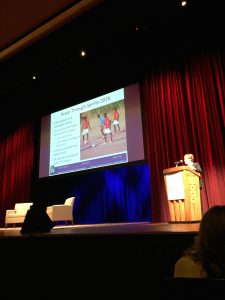 She spoke to two groups of volunteers in September in Washington, DC, who gathered for the Association of Peace Corps Volunteers annual conference. One group had served in Nigeria, while the other consisted of more than 500 volunteers who had served everywhere else, beginning in 1961, when the organization was created by President John F. Kennedy.

The former volunteers wore name badges with the name of the country where they served and the years they were there. Some of those who attended were 70 years of age and older, having served in their youth. One former volunteer, now a septuagenarian, said when he was told he was being sent to Nigeria, he had to find it on a map.

“You had a profound effect on the people you taught and helped,” Ensign told them. She recounted the story of AUN’s founder, Atiku Abubakar, a former vice-president of Nigeria. An orphan, living in Yola, the town where AUN is now located, he remembers being taught by young Americans.

“He admired their enthusiasm and their emphasis on critical thinking and excellence,” Ensign said. As a result of these encounters and friendships made, Abubakar said he developed the desire to excel and succeed, despite his hardscrabble beginnings.

“Later in life, he chose the American model of higher education for the university,” she said. AUN enrolls more than 1000 students and is deeply involved in the development of the surrounding region, Nigeria’s poorest and now facing famine after years of attacks by the Boko Haram terrorist group.

Twenty-six of the young women from Chibok, who escaped Boko Haram’s clutches, are now studying at AUN under full scholarship provided by an American philanthropist.

AUN’s work as a development university seemed to resonate with the audience. They especially appreciated the focus on literacy, improving local education, training for women, and the emphasis on introducing sustainable farming techniques.

“We’re going through a rough patch now,” Ensign told the audience, “But as those of you who served there know, Nigerians are resilient, energetic, and creative people.”

And they will continue to receive help from Peace Corps volunteers, thanks in part to a $35-million-dollar budget increase that was announced at the Conference.